Today, the talented Christopher J. Coons of Federal Pizza tells us about how he spends his time outside of the restaurant:  in his band, SORXE.

What is the name of your band?

My current band is called SORXE and we’ve been together for about 7 months now.  Before that I spent almost 9 years in Daughters of Fission.

What kind of music do you make?

SORXE could be described as DOOM. It’s super heavy sludge with low tunings. We actually tune our E to A flat. Its insanity!

Who’s who and what does everyone play?

We have two bassists, which is pretty rare. Roger holds down the main bass duties while I get to step out of the pocket and tinker; become the mad scientist, if you will. It’s super liberating and I love it.

What’s your favorite part of being in a band?

Creating is first and foremost, but I very much love the release it provides.  Playing bass is my drug and it’s pretty much all I ever think about–except when I’m giving impeccable service at Federal!  If I don’t play for a while, I can be kind of cranky.

How did you come up with your name?

The band name SORXE comes from the idea of music creation and energy coming from a place inside us that is very sacred.  When channeled, it can be a religious experience.  Whether it’s creating music, art, life, memories, or experiences–whatever the case may be–everything is reflective of this. This is the source of our passion and we will ride with the currents and latch onto the pure stream of creating something from nothing, as if it was always there.

What’s the craziest thing that’s ever happened to you at a show?

I’ve fallen off the stage, thrown up, and had my amp catch fire.  Not sure what’s the worst there… 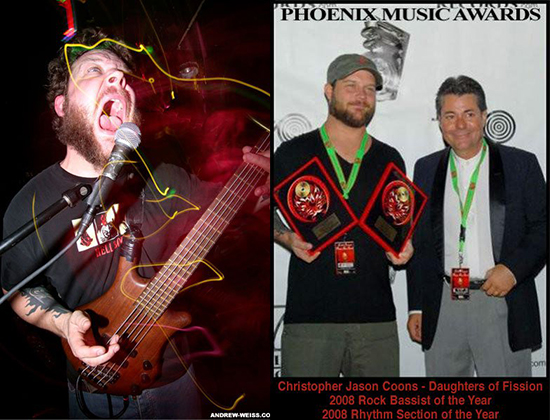 You can find more information about SORXE on their Facebook page!